Now that the dust has settled: 7-1 and beyond

Nothing felt right the day of the game. After weeks of clear and sunny skies, an ominously dark cloud had extend its way over Rio de Janeiro. Everyone was trying to fake optimism in the wake of Neymar’s injury. Maybe because relatively few German fans made it to Rio before the final, everything felt a little bit quieter than it had been in the previous rounds. Every available TV set was still surrounded by hopeful fans, but there was a little less umph in all of their cheers. It’s as if they knew what was about to happen.

During the opening round of the Cup, if you would have asked any Brazilian walking down the street what would be the absolute worst outcome they could think of, you’d have gotten mostly different variations on the same theme: Losing the the Final match, in the Maracanã, against Argentina (or Uruguay). It would be just like 1950 all over again. Nobody wanted that.

Interestingly enough, nobody would have mentioned getting blown out in the semi-finals. Or if they had, they would have predicted a score like 3-0, maybe 4-1. Even those who had no faith in the Seleção couldn’t have predicted that game against Germany. Doing so would have felt cruel and petty.

Hiding under a canopy next to the beach, the only smiling face we saw was that of the guy selling umbrellas and plastic ponchos. Water poured down onto the TV screen, and I remember someone behind me worrying about the set exploding in our faces. Huddling together and cold, it felt as if we were watching the game because we had to, not because we really wanted to.

Any feigned optimism went away with the first German goal. The initial shock barely had enough time to wear off before the next goal went in. As we watched Brazilian goalie Julio Cesar helplessly flail around with no support from his teammates, one question popped into all of our minds: How much worse could this get?

Soon after, if only for a few minutes, that question was answered. Just after the German squad made it 5-0, the owner of the bar frantically came over and told everyone to leave. With one word– «Arrastrão»– every Brazilian immediately got up and ran out, while a few of us hung back to foolishly flip through our Portuguese-English dictionary to see what the word meant. It turns out that «arrastrão» loosely translates to  a combination of rioting and looting, and that the bar owner was bringing all of his tables and chairs inside to minimize the damage. This was the kind of collective violence that people believed would be possible during such an embarrassing defeat.

But then a funny thing happened: After a few seconds of internal panic and following the crowd away from the Fan Fest down the street, we realized how calm people looked as they walked down the street. Their faces looked sad, not angry. Nobody was even looking at each other; they just wanted to get home and forget about the match. Over the next few minutes it became more and more clear that there was no riot taking place. The news later reported only a few minor fights around Rio, nothing too serious, other than the crushing of an entire country’s collective soul. And it was only halftime.

I spent the second half at a different bar a block away. Like most places, it had stayed open despite the momentary paranoia. I watched how the Brazilian fans reacted, how they began to cope. Most just smirked. My favorite reaction were those that began rooting for Germany, not out of sportsmanship but because the team’s jerseys were strikingly similar to those worn by Flamengo, one of the most popular club teams in Brazil. Pretending they were watching a Flamengo game made each German goal much more enjoyable. When Oscar scored the Brazilian sides’s lone goal at the very end of the game, the fans gave a sarcastic cheer that I previously had thought was reserved for the bleachers at Yankee Stadium. When the final whistle sounded, the bar let out a collective sigh of relief and headed home to get ready for work on Monday morning. 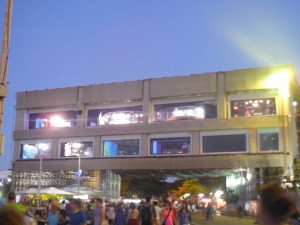 So what happens now? Now that all the Argentines have gone home (after paying off their traffic tickets) and the Germans have left (with a few parting gifts), where does that leave Brazil? Other than a few new jokes about German shepherds and jerseys being three times cheaper than they were before «sete-a-um», very little has changed.

The scaffolding that once held the Fan Fest screens has been taken down, revealing the sandy beaches they had been covering for weeks. The official FIFA store has closed down, and Fuleco, the happy-go-lucky armadillo, has gone with it. One of the remnants still standing is also the sources of one of my most lasting images of the Cup. That would be the erector set-like structure that was quickly constructed between Copacabana and Ipanema to host television crews from around the world. While the image on TV showed a perfect view of the Rio skyline, anyone walking on the sidewalk beneath the structure couldn’t help but wonder when this thing would come tumbling down. I always got a kick out of picturing the guys from ESPN slowly going up the external elevator to their makeshift cubby of a TV studio. Now that the backdrops have been taken out, the structure looks even barer than before, waiting for someone to tell it what to do (or, more likely, waiting for the Olympics in a few years).

The other most lasting image I have from this Cup happened during the opening round, as Brazil had its way with Cameroon. Walking along the same beach sidewalk, to my right were kiosks filled with cheering fans, excited that their team was so far living up to expectations. On my right, a small crowd of protestors made their way through the street, carrying anti-FIFA banners and signs. I had a moment of fear when I saw the military police go to attention, and then again when I saw other officers join with them. But instead of confronting the protests, the officers walked along side them. This wasn’t a sign of solidarity, but a human wall meant to block them from those  watching the game. It worked- most people kept their eyes glued on the television as the protest walked past, their shouts drowned out in a sea of cheers.

One popular topic of conversation ever since 7-1 has been whether or not a Brazilian championship would have made people forget about all their complaints going into the Cup, about all the extra money and stadiums and relocations. I really doubt that it would have made a difference, though speculations about October’s elections will  certainly be full of soccer talk. While we came just short of the Brazil-Argentina final that I had been hoping for, 7-1 and all it represents will surely leave its mark on the country for much longer than any shiny little cup could have.