Book Review: A Planet for Rent 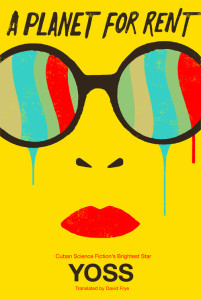 As recently as a decade ago, a story of a plane carrying the US’s first African-American President setting down in Cuba for an official visit would have been written off as science fiction. Now that the impossible has been proven possible, the onus is back on speculative fiction writers to continue pushing the limits of believability.

As Gabriel García Márquez and more recently Junot Díaz have already pointed out, Latin American and Caribbean writers must often use magical or science fiction elements because that is the only way for their texts to match the seeming unbelievability of their regions’ histories. Legacies of invasions, bioengineering and techno-colonialism are now compounded by surveilling drones, data-collecting gadgets and virtual realities. Even in Cuba, where the presence of a functional subway system constitutes a scene from a very distant future, science fiction writers are given the task of imagining a hyper-connected world in which current political and social pressures are both amplified and digitized.

Yoss (José Miguel Sanchez Gómez) is possibly the most recognizable figure from Cuba’s Sci Fi scene. His writing and personal style (he’s the lead singer of a heavy metal band) have made him the poster-boy for science fiction on the island. In 2001, Madrid’s Equipo Sirius published Se alquila un planeta, a frenetic, fragmented novel that takes glimpses at a number of different earthlings as they attempt to navigate the rules of a new intergalactic imperial order, one in which Earth has been delegated by the Xenoids as a Protectorate and all industry has been banned outside of tourism. Human transportation off the planet is highly regulated, technological development is officially blocked, and criminals are forced to give up their bodies as «horses» for other species to enjoy the Earth’s atmosphere.

As impressive as Yoss’ novel is, this review is not for Se alquila un planeta, but A Planet for Rent, David Frye’s translation published in 2015 by Brooklyn’s Restless Books. It’s publication not only shows the growing popularity of Yoss’s work, but also the US’s continued fascination with Cuba. Frye does an impressive job translating such a complicated a text, one full of  Colossaurs, Cetians, Centaurians and Grodos. Despite the lack of a linear narrative, Frye manages to maintain the connected feel of the novel through the singular world that all the different characters inhabit. Reading the book in English highlights the moments in which Cuba-US relations are specifically examined: futuristic balseros attempt to escape Earth in makeshift space ships, while athletic exhibitions of Voxl (a Colossaur sport that makes quidditch look like checkers) are nationalist spectacles in which Earthling players hope to defect to the foreign league. By publishing this novel for a US audience, it’s now easier to connect these dystopian scenes to, say, a Spring Training trip to Havana by the Tampa Bay Rays.

Frye’s translation will hopefully lead even more of an English-speaking audience to Yoss’s other work and that of other talented Cuban Sci Fi writers. More than just quenching a fascination for a place that has been inaccessible to many for so many years, the real challenge in reading these texts is recognizing that we, the US, are the Xenoids. Understanding the US’s role in the technological, military, cultural, economic and political colonialism of Cuba is an important step in making possible futures of re-normalization into reality.