«They All Wanted to Dress Up Like Sor Juana»

Salgado used the story to connect the exhibit’s central images, which capture the baroque splendor of the Mexican churches, convents, and cathedrals built during Sor Juana’s lifetime, with its title—invoking the legacy of that splendor, the manifestations of it in the 1920s and beyond. Salgado, who works primarily with Cuban writers of the mid-20th Century (Sarduy, José Lezama Lima, Alejo Carpentier) said of those writers, “They all wanted to dress up like Sor Juana.” 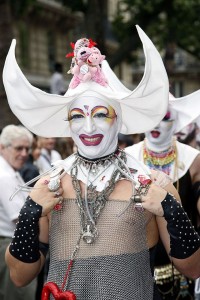 The story gets right to the trickiest part of the argument that Inside the Baroque, under the guidance of curator Julianne Gilland, is trying to put forward: that the Baroque isn’t just a style limited to a historical moment that ended hundreds of years ago, but instead a spirit that spreads out from that historical moment into contemporary Latin American (and North American) culture, and will continue spreading into the future. That spirit, as Salgado’s anecdote shows, is based not just on the exuberance and excess that we typically associate with the Baroque, but also artifice, eroticism, transgression, and humor. Above all, humor—but an irregular type of humor, based simultaneously in parody and homage, in sincerity and irony.

The Benson exhibit is built around a series of photographs, donated by Dallas artist Carolyn Brown, of churches and cathedrals from the Spanish colonial era, and a documentary on which she and filmmaker Quin Mathews collaborated that brings those images to life. The majority of the images come from México, though (interestingly) some are from San Antonio. In the exhibit’s display cases, Gilland connects those photos not only to the writings of Sor Juana and her contemporary and compatriot Carlos Sigüenza y Góngora, but also to Lezama and Carpentier, and to the groundbreaking 2000 exhibit at the Museum of Contemporary Art San Diego, Ultrabaroque: Aspects of Post Latin American Art.

The Baroque is having a moment right now: Lois Parkinson Zamora’s The Inordinate Eye (2006) argued that the Baroque is the primary lens through which we should understand Latin American art and fiction; Angela Ndalianis’ Neo-Baroque Aesthetics and Contemporary Entertainment (2004) and Monika Kaup’s Neobaroque in the Americas (2012) tied the Baroque to phenomena as wide-ranging as The Matrix films, rollercoasters, Mexican-American lowrider culture, and Luis Gispert’s hip hop-influenced visual art. Just down I-35 from the Benson, the McNay Art Museum in San Antonio just finished its exhibition Beauty Reigns: A Baroque Sensibility in Recent Painting, and even closer to home the Blanton Art Museum just opened Re-Envisioning the Virgin Mary: Colonial Paintings from South America, an exhibition that perfectly complements Inside the Baroque. Literary critics are even beginning to call contemporary poetry from the US “baroque.”

Inside the Baroque gives context to the Baroque’s current vogue. With a few carefully selected images and texts, Gilland shows how the irreverent, capacious spirit of México in the 1600s could give life to a style that nurtured so many offshoots, and that grew to the point that it’s now an unavoidable aesthetic in today’s arts. She shows, in other words, how much of what we call contemporary culture really just involves dressing ourselves in the habit of Sor Juana. 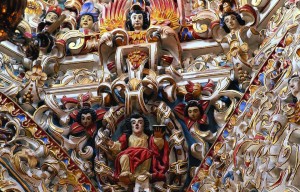 Inside the Baroque: The Viceregal Legacy of New Spain will run until January 31st.