Sir Arthur Conan Doyle’s serially published novel The Lost World (1912) takes place in the far off plateaus of the Brazilian Amazon, where a group of English explorers, naturalists, and geographers follow up the egotistical, burly-yet-brilliant Professor Challenger’s claims that prehistoric creatures exist virtually untouched. After crossing oceans, rivers, and ravines to reach this mystical plateau, indeed, dinosaurs are found. Along with these dinosaurs, savage pre-historic ape people terrorize the travelers, and relatively friendly Indians offer their help and guidance. The novel reads similarly to non-fiction Amazonian travel narratives of the period – except this time with dinosaurs. 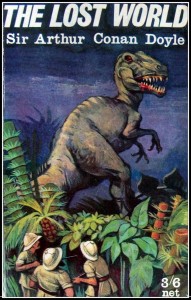 Doyle’s novel, widely believed to be influenced by his close friendship with renowned Amazonian explorer (and later famously mysteriously missing) Percy Fawcett inspired Michael Crichton, author of Jurassic Park and its sequel The Lost World, almost 80 years later. (For more information about Fawcett, check out the fascinating book The Lost City of Z.)

After having gone to see (like most of the world) the newly released Jurassic World, I began to think that the consistent setting of this prehistoric place-out-of-time in Latin America warranted a closer look.

The first Amazonian rubber boom was at its height as Doyle wrote his novel. International attention was focused on the Amazon jungle as an unexplored region, and explorers around the globe hungered to be the next Hiram Bingham. In fact, Percy Fawcett was convinced that somewhere in the middle of the Amazon there was a lost city similar to Machu Picchu just waiting to be re-discovered by the right white male explorer. Drawing on inspiration from members of the Royal Geographic Society (including Roger Casement and E.D. Morel, leaders of the Congo Free State reform campaign), Doyle captured the imagination of a public already eager for fantastic discoveries by melding together exploration, Darwinism, and the pre-historic. 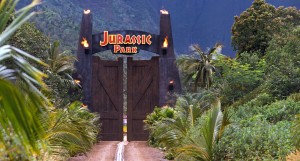 So what does it mean that instead of “civilization” Doyle has his adventurers discover dinosaurs? And how can we compare movies like Jurassic Park and Jurassic World that play on this same mystery and excitement of discovery during a time when the world is almost fully mapped and gridded – the “unknown” virtually extinguished? And why always in Latin America?

While the Jurassic Park series centers around the idea of using DNA from mosquitos trapped in amber to duplicate dinosaurs, Doyle, in 1912, was able to imagine dinosaurs as having remained in South America living untouched for thousands of years. This speaks to the idea of Latin America and the jungle in particular as kind of black holes where the magically realistic could potentially exist or be projected. There also seems to be a tension between wanting to maintain the unknown while also knowing and gridding it.

Much like in The Lost World (the book), the Jurassic Park series of books and movies feature incredibly few actual Latin Americans in roles beyond being immediately eaten by a raptor, or as the guy that runs the roller coaster ride in the park. This imagined Latin America becomes an isolated Disneyland where people from the United States and Europe can come, gawk at the novelty, and continue on their merry way. Although, I guess in the case of the Jurassic Park films the way is not that merry and the conniving capitalism of those behind a Jurassic Disneyland get their come-uppance.

Hailing from Kalamazoo, Michigan, Jessica has a BA in Comparative Literature and Spanish from the University of Michigan, after which she was a Fulbright Teaching Assistant at a small university in the Brazilian Amazon. Her current research is about Amazonian exploration and mapping.