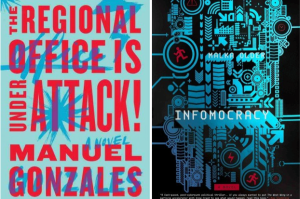 It’s an election year. The principles of democracy are being upheld in name only, as voters are forced to chose between the imperfect, corporate-backed establishment parties and idealists who are immediately written off as unrealistic. A rival party is attempting to wrestle control way from the incumbent by subtly coding war-mongering and prejudicial hints into their campaign slogans. The consolidated media is an inescapable force that not only supports the election process but actively participates in the filtering of political messages. And some people live in mini-spaceships.

Up until that last part, the above paragraph could have been describing our current situation. Luckily, Malka Older’s near-future sci fi/political thriller Infomocracy sways just far enough away from the present for those of us who still feel dirty after watching the RNC. Infomocracy, Older’s first novel and the first one published by the popular SF site Tor.com, describes a pivotal election two decades after the establishment of micro-democracy, which disolved national borders, allowed for free migration and set up 100,000-person voting blocks. Each «centenal» can elect their own government, sometimes opting for local regimes, though more often latching on to large political parties, like Heritage, Liberty and Phillip Morris.

The whole system is supported through Information, a Google-Facebook hybrid that controls cybermedia and personal profiles that are immediately visible upon meeting someone new. This hyperconnected society allows the novel to travel back and forth with characters as they flow between neighborhoods and continents. Older, who is of Cuban-American descent, credits her imagining of a post-national world to her experience as an international aide worker. Other national markers also become irrelevant, as translating implants make language barriers disappear and personal identity becomes hyper-local.

Older shows that while the institution of the State may be outdated, utopian visions of alternatives may be ignoring some dangerous pitfalls. Just two decades after the establishment of micro-democracy, the system is already crumbling, with Liberty looking take the supermajority away from Heritage by subtly promising the destruction of social order to its supporters. The novel follows the tense moments leading up to the election through the eyes of an Information employee named Mishima, a small-party intern named Ken and a dissident named Domaine who mistrusts this new system’s version of democracy, among others. Infomocracy puts into question optimistic visions of technology’s role in democracy, when open access isn’t as open as it seems, and highlights virtual reality’s inability to escape the real-world dangers, like natural disasters and human corruption.

In a similar way, Manuel Gonzales’s The Regional Office is Under Attack! poses an unanswerable question: Who exactly are the good guys? Gonzales, who’s 2014 collection The Miniature Wife showed a penchant for fantastic and supernatural storytelling, dives headfirst into the superhero genre. In the novel, the Regional Office is the name of a secret agency that transforms powerful women into unbeatable assassins. The Regional Office is one of many such private companies that leases out their services when paranormal or extraterrestrial forces threaten the fate of the world, though this novel focuses more on intra-office politics than top-secret missions. Though a researcher from the future fills the reader in on the agency’s history, much of the action takes place on the day in which a group of operatives decide to take down the company from within.

Though the Regional Office prides itself on performing its altruistic (and very profitably) duty, conflict arrises when one looks closer at the process of finding and training operatives and oracles. The women are kidnapped and put through rigorous hazing, all in the name of helping each one reach her potential. The oracles are used to justify the kidnappings, along with the disposal of operatives once they are considered threats to the agency’s wellbeing. Power, both supernatural and corporate, is exchanged and abused. Though the novel spends equal time on both sides of the violent revolt, it is difficult throughout most of the book to figure out which side to root for.

Probably the most intriguing character is Sarah, whose mechanical arm forces her to defend her humanity to herself and to her coworkers. Though denied a spot among the operatives due to her lack of «natural» gifts, she finds herself at the center of the attack and is forced to defend an institution that she knows has taken advantage of her. Watching her negotiate her dehumanization and status as an outsider serves as an interesting case study in imagining the future of marginalized bodies and the rebellious potential of cyborgs. Her rival in the novel, Rose, is similarly alienated, highlighting how governing institutions can create conflict where there should be solidarity.

The Regional Office is Under Attack! is an irreverent take on superhero narratives, corporate culture and US popular science fiction. While Gonzales’s novel is lighter and funnier than Older’s fast-paced, action-packed narrative, both books take on the important task of diversifying science fiction, in terms of both gender and race. Writing futuristic stories that feature different kinds of people is the first step in imagining more inclusive and democratic futures. Both of these novels not only question authority, but also force their readers to ask more of those whom we put in charge.

The Regional Office is Under Attack! (2016) by Manuel Gonzales, Riverhead Books