Native Roots: An Interview with Desirae Harp and Diego Romero

The first Native Roots Open Mic Series at Resistencia Bookstore on March 13th, will welcome various styles of performance to provide a showcase for up-and-coming Indigenous and non-Indigenous artists. The event is organized by first-year Linguistic Anthropology graduate student Qui’chi Patlan. By fostering connections between Indigenous/Native communities and cultures across the Americas Native Roots seeks to challenge our preconceptions of how we visualize indigeneity in the 21st century. The following interview illuminates the artistic development of the two rising Native artists who will be traveling to Austin to headline the inaugural Native Roots Open Mic Series. 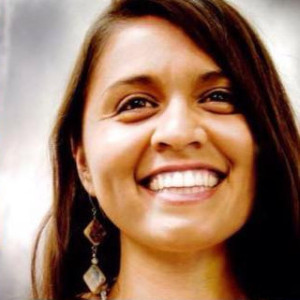 Desirae Harp is a member of the Mishewal OnastaTis (Wappo) Nation from the central coast of California and a Diné (Navajo) descendant. She is a singer/songwriter, cultural advocate, and teacher. She also is the founder of the Mishewal Wappo language revitalization program, and uses her music to help preserve her indigenous language. 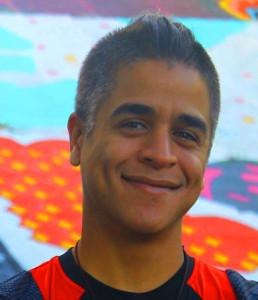 Diego Romero, a musician and artist of Taíno descent from Carolina, Puerto Rico. Diego’s music contains influences of Bolero, Bossa Nova, Son, Salsa, Andean folk music, Trova, Rumba, and Hip-Hop. He is also a visual artist and street art muralist. His murals can be found in the streets of San Juan, Argentina, New York, Montreal, Arizona, among other cities.

How did you begin performing in front of live audiences?

DH: Since I liked to sing, my grandmother, who worked for the Indian Health Office, would throw me up on stage at the Indian Health events she would organize ever since I was two years old. My local scene was in Santa Rosa, CA where my tribal office is. In 2012, I joined a band called Audio Pharmacy and that was the first time I performed my own songs that I had written.

What was one of the best experiences you’ve had at an open mic in the past?

DH: In Oakland every Wednesday night at a building called The Layover all these Jazz, Funk, Hip-Hop and Blues instrumentalists, singers and rappers would have a jam session, from 10pm-1am. I loved it! It was very organic, you didn’t have to sign up. Singers would harmonize together with rappers and there was all different kinds of instruments that came together.

DR: My first open mic was at the University of Puerto Rico in 2001. I was 16 and my brother invited me to this poetry slam. We went together with a group of friends, we were all graffiti writers but we also liked to write poetry. I read 3 or 5 poetry pieces, and people were asking: “Who is this kid talking about social criticism through metaphors?” My work was later published in a university publication: Tonguas.

DH: When I wasn’t a part of the band, Audio Pharmacy asked somebody from the audience to come up and freestyle, so I did it and they liked it. That’s basically how I got connected with them. Being a part of this band really pushed me to become better at improvisation. The more that I did it, the more I realized how many things I had to say. Because when you stop thinking and say what comes to the top of your head you tend to say awesome things you wouldn’t say if you were writing with a pen and paper. I think that when you are performing in front of a lot of people, you obviously will feel more comfortable when you’ve rehearsed your performance. But improvisation is how I feel I create some of my best work.

DR: I learned the structure first in order to memorize the chords…leía un papel para saber donde poner los dedos, that’s rehearsing–after that I was able to play the basic arrangements. But I improvise a lot and that’s the foundation of what I do. I’m not all into formulas. I’m always open to incorporate ideas that are valuable and mix it with any idea that I’m doing. I like always to enrich my work, and the only way to enrich what I know is by improvising and using the public in order to interact. I learned through Rumba, where the structure (la clave) is always there but there is always movement around the structure. It’s a kind of cosmovisión of playing around the rhythm.

What is one of the most humbling life experiences you had?

DH: Being at the dock of the bay in the middle of a storm. It was during a time when I was at one of my lowest points, during a time I felt disconnected from myself. I felt like I was a part of the water as the waves were crashing. I wrote about it in a song. It reminded me that I was connected to the earth and that the strength in the earth is also within me. It made me feel more powerful, but it was humbling at the same time.

DR: In the beginning when I would expose my music in public, I was so shy and insecure of myself. I felt that since I didn’t formally study music I was no musician. There were some periods where I didn’t do music because I felt so ashamed. But later I learned that my music was able to really heal people. So then I started to take it more seriously and develop more confidence. Because then I had a responsibility, serving, giving life, healing, sharing, making joyful moments, creating sensations. It’s moments like these when you finally know that it’s not about yourself. For me that was humbling.

Aside from music, what other ways you express yourself through art?

DH: Oooh…I love dancing. And I genuinely enjoy basket weaving, which is something that the tribes that are local to the area that I’m from, the central coast of California, are very well known for. Right now I only know how to do the twine baskets, but I want to learn how to make the coil baskets. Traditionally you’d go and harvest plants and make baskets that way, but I haven’t had the opportunity to make one that way yet. I grew up going to the roundhouse ceremonies so I like to dance there. But then I’m also a big fan of reggae, so I like dancing to reggae too.

DR: I generate mural projects and also work with communities to do mural workshops. I dedicate myself a lot to writing, which helps me a lot to draw, to paint, to make music, to organize myself, to understand things, to keep reading new stuff. I write, I play, I like organizing, I like being active in society, being an influence and bringing coherence and common sense to society. I’ve also been able to publish some of my poetry, but I want to publish a poetry book one day.

How can listeners access your work? What new projects are on the horizon?

DH: Audio Pharmacy is helping me produce my first solo album. I also have a music video coming out in a few weeks entitled: “Be There,” which is a song from Audio Pharmacy’s album State of the Heart. The video and the album can be found at facebook.com/Audiopharmacy. You can also find me on laststandmixtape.com, the song I wrote is called “Center of the Earth.”

DR: You can access my work through soundcloud.com/diegoromeromusica and facebook.com/diegoromeromusica. I also play live in different venues in Puerto Rico. I have a steady gig at a place called La Junta, in Calle Loíza, Santurce. I’m pretty silent about my new projects, but I am trying to plan more art exchanges in the Yanaguana-Austin area. Ahorita Puerto Rico está estancado, la economía, las propuestas, no están fluyendo las cosas. So I’m looking forward to new horizons, not just the US but the whole world.

* The inauguration of the Native Roots Open Mic Series will take place March 13 from 4pm-6pm at Resistencia Bookstore and will continue on dates to-be-determined in the months of April and May. If you are interested in performing please contact Qui’chi Patlan at < quichi@utexas.edu >. 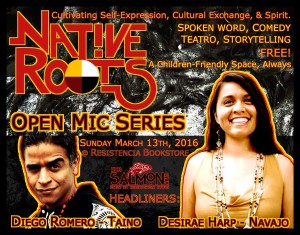