I’ve written about travel envy before, but I’m feeling it acutely right now, as my friends are off researching, leading study abroad groups and awesome community projects, jetting all over the world and posting the sort of pictures that Megan writes about in this post. All while I’m facing down three months of dissertation writing in a windowless study on the 6th floor of the Perry Castañeda Library, broken only by the menial labor I’ll have to do to make ends meet.

Last summer I was in Cuba doing the research that I’m writing up now.  Last summer my days were spent immersed in the private writings of one of my favorite authors, and my study breaks were trips to the playas del este. 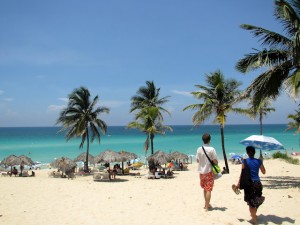 On the bright side, I have some friends and colleagues going to Havana this summer, so to help them and, more importantly, relive past glory, I’m going to share the one thing I wish I had known on my first day in the city: where to have a good drink. 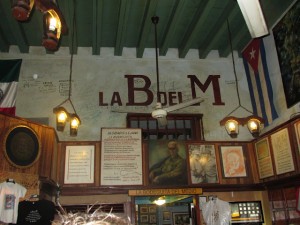 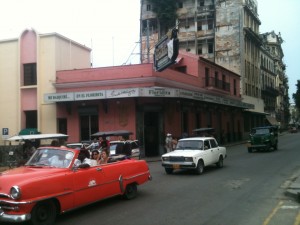 There are lots of good bars in Havana, but the best place to spend happy hour isn’t one of them. Instead, it’s the  malecón, the sea wall and boulevard that runs for 8 kilometers along the city’s northern edge. It’s a matter of atmosphere, but also of economics.

See, beer in Havana is a standard, government-regulated 1 CUC; the CUC is pinned to the dollar, so that means that (most places) a beer will cost you a buck. Exceptions are hotels, where beers are 2 CUC, and the micro-brewery on the Plaza Vieja, where the beers are 3 CUC (but very good). That’s a great deal compared to US prices—where can you find dollar beers here? But a dollar is a lot of money in Cuban prices. And don’t even think of going to El Floridita or La Bodeguita del Medio, where drinks will cost you between 4 and 7 cucs. You could eat for a week at that price! (I take that back: go to La Floridita and La Bodeguita once. But only once, and only for one drink.)

But whereas beer and cocktails are relatively overpriced in Cuba, rum is cheap and good. In the picture below, the $20 price on the sign is in pesos, not CUC, so that means that they’re selling 950 ml of rum for about 75 cents. 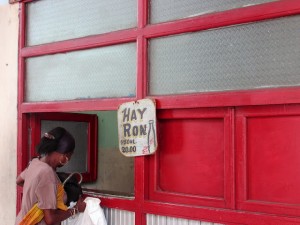 A liter of Havana Club, which is great rum, will cost you more than that. But it’s still a great deal, and you can get it at any gas station, grocery store, or corner bodega.

So here’s what you do: when you’re done researching and writing for the day, and the sun is starting to set and the heat is starting to fade, grab your colleagues or the friends that you’ve made on the island. Buy a bottle of Havana Club and some cans of TuKola. Go down to the malecón, where it will seem like the whole city is out sitting and talking and laughing. Claim some space. Face the city, not the sea. Open a can of Cuban coke, take a swallow, and pour the rum into the space you’ve just made. And there you go: a makeshift cuba libre.

Sit there for hours with no waitresses bothering you, with the city in front of you and with Florida 90 miles to your back. Pass your drinks around. And try not to think of me, back home under the fluorescent lights of the PCL. 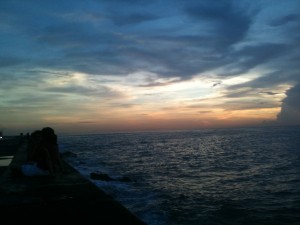